Today we have another guest post from Evgeny Ignashov, who represents the Candysign project: creating sites, icons, networking, programming.
Are these lines read by creative people or those who consider themselves to be them? If so, then they are probably familiar with the times of both crazy creative eruption and creative stagnation. At least they are familiar to me (we will assume that this suggests that I am a real creator :)) Stagnation with us, the designers, can happen for a great variety of reasons, such as: hunting for sleep, the customer is stupid, the muse has left or a favorite song in vinamp is over. Everyone has their own. The question arises: “How, damn it, is it painless to spur creativity and creative thinking?” Honestly, I really think that you can somehow single out from the general mass of options, several that work most effectively and for the largest number of people.

For example, you are a designer (although, most likely, you are) and you have the same stagnation, and people demand and even periodically call with the question: “Well, what is there?” The most effective method of transformation for me personally into a combat design unit is, oddly enough, waiting… Yes, indeed the saying “morning is wiser than evening” is true. You sit, suppose, at one in the morning, drawing something, but you feel that, as they say, it is not rushing. And there is no impulse, and stay in one place for a long time, in order to bring it to the ideal, and so on. Whoever studied in an artist or stupidly went to a circle in childhood, the teacher, at the same moments, probably advised to move away for 10-15 minutes from his drawing and just be distracted by other things. Being distracted, the image of the picture partially disappears from your head and then you, so to speak, look at your brainchild with a fresh fresh look and immediately see what you did not notice when you gazed at it for an hour.

Muse can also return and when contemplating something / someone beautiful… But certainly not just beautiful or affectionate as, for example, small children, puppies, kittens or naked aunts, but “thematically beautiful”. Those. it is a good idea to familiarize yourself with the works of senior comrades, colleagues in the workshop, those whom you consider your spiritual mentor, Guru and others. It is advisable to look for similar works on the topic, and not just look at pictures. Right now, probably some are thinking: “What is he hinting at, you bitch? Suggests to crap other people’s ideas? ”. I’ll answer directly and honestly, without bending my heart – no). I tend to, again, the well-known adage “Learn from many, do not imitate anyone.” Even the great, at the stage of their formation, learned from someone, drew inspiration from something, used something… If a simple designer has your personal art director with you, you can turn to him too, let the salary work out. Don’t try to walk through portfolios of quality web studios and learn from them.

Let me remind you again that you just need to learn, not steal… Yes, the line is thin, but sometimes the worm of mediocrity and sharpens, you bastard: “Sopri, face, the Internet is big, no one will burn.” The role of this worm can sometimes be replaced by not too conscientious colleagues in the shop, they say: “Why? I always do that and nothing. ” This should include your design pride, of which every designer usually has enough.

Somehow I climbed the site of one well-known “bird” in the field of design and came across an article or rather a note, the general meaning of which is that creative crisis can only occur if you go in the wrong direction, but it’s impossible to come up with something original and unusual. The unusual can appear only by itself in the process of work. I partially agree. For example, in the fact that an interesting idea can arise in the process, but I think that it can also appear by itself. Let’s say you were given an order for a bakery website and right away, right in the process of discussing the details of further work, you came up with a fat aunt in the center of the screen with a plate of rolls or something like that. Not too original, of course, and does not feel like a masterpiece of design thought, but let’s not forget that this is just an example and I came up with it on the go in 3.5 seconds.

You can also overcome this creative crisis by generating obviously not the most original ideas. (something like “brainstorming”). That is, simply throwing in some working material of 70 percent of which in the future will be eliminated by ourselves. But, at least, it will give you a vector along which you can already go without wasting time. For example, according to the same bakery, you can immediately understand for yourself that it is not very logical to make a site in dark colors, therefore, it should be done in light or neutral colors. The colors are warm and cold, thinking about what the ideal bun should be, you will certainly stumble upon the idea that it should be fresh, fluffy, and certainly WARM. The chain of logical reasoning can be continued further, periodically writing down or sketching (as it is more convenient for anyone) worthwhile ideas. After reflecting on the order I had invented, I came to some completely logical conclusions. In short, in the end we have:

Agree, you can already start working with this. Is not it?

Well, thanks to Evgeny Ignashov from Candysign for another design and philosophical material for discussion. It would be interesting to read in the comments what sources of inspiration you use and what you generally do when there is no creativity.

In principle, I think this situation is applicable to other “creative professions”, for example, blogging or, to put it simply, writing. It happens that you sit down at the next article that needs to be published, come up with a topic, but your thoughts do not want to materialize in letters and lines on the monitor screen. In this case, I think, as for any other creative, painstaking, “smart” work, you need to be distracted – literally for 10-15 minutes or more to occupy yourself with something else, or to have a rest. Secondly, you can draw analogies with contemplating the work of other designers and reading publications by other authors. This can resolve the issue of creative crisis or stagnation in the search for ideas for new publications.

PS Guards. Reading about DIP 2.0 – New service for storing bookmarks.
Where to have fun in Kiev? Full Kiev online poster, news and articles about Kiev.
A useful article about how to promote a forum – we discuss and share our experience.

If you want to create a website, then the main rule to follow is not to overdo it. The so-called minimalistic design has been helping web designers in this for several years. By the way, he is now at the peak of his popularity. Today we will try to figure out what this style is…

Despite the fact that email marketing has been around for decades, it still remains a hot online marketing trend in 2020 and a popular way to promote services online. The method shows good returns at minimal cost and can compete in efficiency with the development of B2B sites (business for business) or the creation of…

One of the most notable web site design trends of 2017 is splitting the screen into two. More and more web projects use this layout option, where two vertical panels are placed next to each other. Split Screen Design follows a very simple rule: one screen, two messages. Each side includes a separate element: photo,…

What is the simplest, correct, and sometimes the only possible way to create the illusion of a relief of this or that element (object) in web design (as well as in 2D in general, and naturally 3D)? That’s right – use a texture! As a versatile “material”, textures are widely used in web design and…

Recently, we posted a number of useful tips for creating effective registration forms on the site, and today we want to talk about the authorization / login block. Recently, a lot of annoying and too “abstruse” implementations of it have appeared on the net. It’s good when designers try to make unusual and beautiful login… 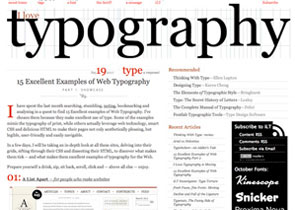 Typography for a website is a rather important design element, which is somehow not very strongly expressed in Runet. This question is more often raised on English-language foreign design blogs, we practically do not pay attention to it. No, of course, when creating a layout, most designers think about fonts, design, but very modestly and…

Purchase
We use cookies to ensure that we give you the best experience on our website. If you continue to use this site we will assume that you are happy with it.Ok